We had Kaylee's 7th birthday party here in September but I'm just getting around to blogging it now. Now that our first snow has fallen, things should start to slow down here a bit as we all tend to hibernate inside more than out, at least until we get used to the colder temps.
She had a royal themed birthday party. Her invitations were a Silhouette cut file. I added two brads and some twine to the front to close the castle doors. 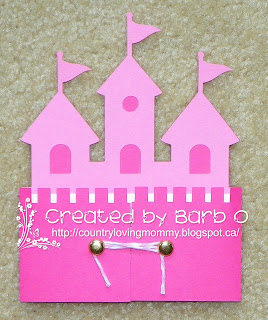 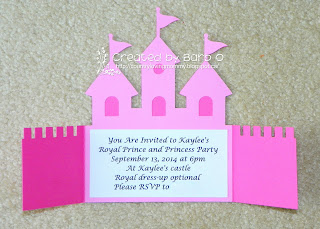 For party decorations, I saw balloon towers on Pinterest and thought I could make them. The most complicated and time consuming part of the whole party was cutting out the Bristol Board "peaks" for the towers. I should add here that my mother-in-law and the husband were tasked with making the peaks, thank goodness, or nothing else would have gotten done. It took a long time to get the diameter just right so that they would rest balanced on top of the towers. We covered them with wrapping paper to give them a more royal look and hung them from the ceiling with ribbon and 3M hooks. The chains were made by my little girls. So great that they can craft along with me now too! The crushed red velvet "carpet" was just a piece of cloth. These were supposed to be outside of the door, but it was windy and rainy off and on throughout the day so it was just safest to move them indoors. 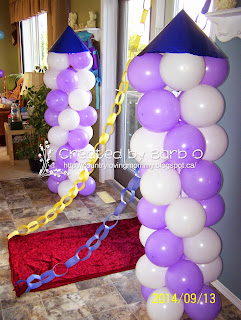 We made a photo station using a removable, repositionable castle decal I found on clearance at Target. The bench is our shoe bench with a sheet draped over it. The hoop canopy is for over the bed but we cut up the back seam so that it could be separated and hung like drapery, again using removable 3m hooks to hang it and for the tiebacks. The balloon flowers were another Pinterest idea and hung on ribbons from the ceiling. 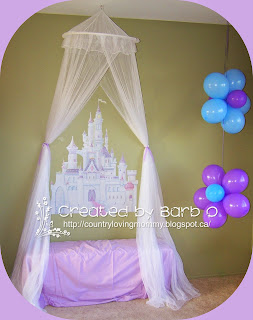 The 2 royal Princesses :) I took a picture of each child with Kaylee in the photo area and then used that photo to make them a thank-you card after the party. 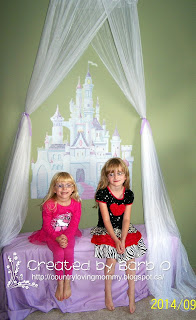 Cupcakes iced with pinky-purple icing and trimmed with white icing made up the birthday cake. I was still adding the trim after the guests had arrived, so it wasn't as detailed as I would have liked if I'd had time to play and get really fancy. But the icing softens when I'm piping it on and I have to put the piping bag back in the fridge to firm it back up. Takes way longer than I allow...every time. I'll get it figured out one of these years, lol. 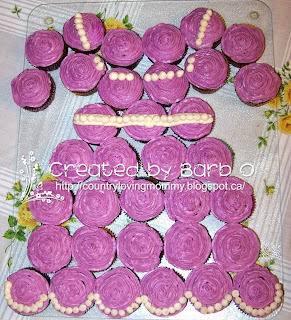 ﻿
I had collected fancy dishes, jars, and bowls over the course of the year and bought a Disney Princess flat sheet from the second hand store to use as a tablecloth. Then I made a candy table with candies bought from the Bulk Barn and all my fancy dishes/vases and some small plastic tongs from the dollar store. I also bought character toothbrushes and toothpastes to send home with everyone to assuage my guilt over all the candy. 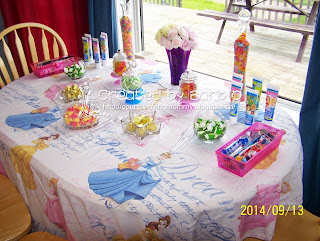 For the treat boxes, I purchased plan, white, take-out style boxes from the dollar store and used Silhouette cut files to decorate them with Princes and Princesses, customized to match the hair color of each of the boys and girls attending. I wrote their names on the back of each box too. Then when it was time to go, they stopped at the candy table, filled their own treat box and picked out a toothbrush and toothpaste. 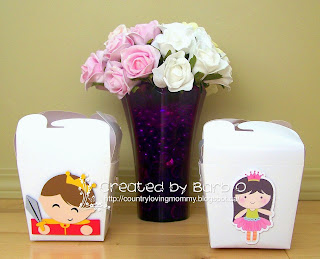 ﻿
Now you're caught up. Our next birthday party is in December and the planning is well under way.﻿
The trend here seems to be parties that are somewhere else. And while I know it's great to have someone else do the planning and clean up and the kids have an activity to blow off some steam, I really like doing these things for my girls. It's part of my present to them. And we can do more and more of it together now that they are getting older and that's pretty special too :)