Sometimes I feel like I could write a PinFail blog. Other times...is that Martha calling? This is one of those Martha moments, I am always shocked (and happy) when a crafty moment works out well. This was for Kaylee's Kindergarten Teacher. I of course got the idea from Pinterest. I bought a straight sided vase. Then I went to the dollar store and bought some decorative pencils. I needed 4 packs of 12 pencils. I had a few left over but how many you need will depend on the size of your container. To test that I had enough before I started sticking the pencils down, I took an elastic band and put it around the middle of the vase. Then I slipped the pencils in underneath it all the way around. This was supposed to also ensure that there would be no gaps at the end (more on that later). Everything looked good so a-sticking I went. Now some people just use the elastic band, put a ribbon over it and call it complete. The advantage to this is that the Teacher can use the pencils. My issue with this was that the pencils all have a lean to them so I went with a stick-em method.

First I placed a piece of painter's tape up the length of my vase to act as straight line/guide for my first pencil. I used my table as the bottom guide. The carpet was used just to take the photo so you can't see the rest of the messy living room. Then I hot glued my pencil and tried to place it on my vase. By the time I got the pencil on the glue had cooled. Second try I put glue on the vase and stuck my pencil on. But when I wiggled the pencil into place it popped off. Repeat first and second try with glue gun. Then I got out the 1/4" Skor Tape. Perfect! It's clear (shows clear through the inside of the vase too), and you can wiggle your pencils into place and they still stay on.

Taped all of my pencils on except 2. Then I learned that while there was room for 2 pencils at the bottom there was only room for 1 and a half at the top. Apparently the silver tops are just a bit wider than the bottoms. I considered leaving the one pencil stuck out a bit at the top (it was really close) but I thought maybe I could pinch the tops enough with a pair of pliers to make them fit. Eureka, I'm a genius, it worked.
More double sided Skor Tape to the beautiful polka dot ribbon from my LSS and then wrapped the ribbon tightly around the middle of the pencils. Next time I would move this up just a bit to leave more room for the tag. I used a potato masher to make the bow. I just Googled potato masher bow. The tag was a Silhouette cut file and the image was from Tiddly Inks - Grow a Little Love. I colored her to look like my Kaylee with Prismacolor pencils. On the back I wrote her teacher's thank-you message. I attached it to the pink bow with pink twine. Kaylee picked out the flowers. 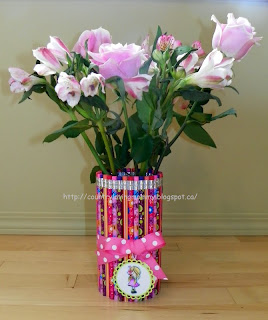 Supplies used:
Straight sided vase
4 packages of decorative pencils/12 to a package
1/4" Skor Tape
Pliers
1 metre of ribbon
Tag optional
﻿
Her Teacher loved it. And there were 2 classes of Kindergartners (they go all day every other day) and they graduated 23 from Kaylee's class and just as many in the other class. So I think you can agree with me that she deserved a special something along with our thanks!
Here's a picture of my Kindergarten graduate *sigh*:

Great idea and it looks spectacular. so does your little graduate!

What a really clever and effective idea Barb.

Thanks so much for sharing your creativity with us at Stamping Sensations challenge.

Cute idea! I saw it on Make it Monday.

Thanks for sharing at Make it Monday (my number is 39).

Hi Barb, fantastic idea, the pencils look really effective! Beautiful flowers too, I'm sure your daughter's teacher would have loved it :) Cathy x (Saw you on MIM)

Lovely project Barb. I saw it on Make it Monday. Lovely photos of your family.
Thank you for your comments on my blog.

A fabulous gift! Thanks for sharing it with us at Stamping sensations for our summer blooms month

What a great idea! It makes a lovely gift. Thank you for sharing it with us for our Summer Blooms challenge at Stamping Sensations this month.

WOW! Love this pencil vase! So original and beautiful! 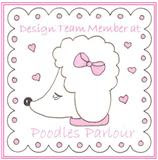